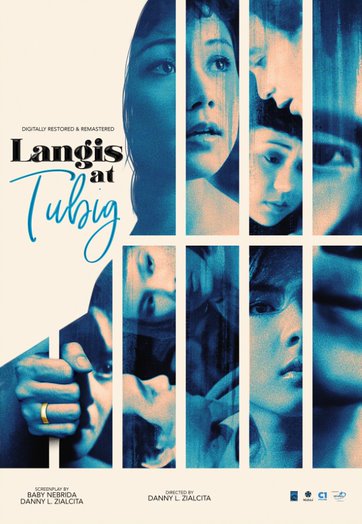 Short Synopsis:
A strong and sensible woman, Cory (Vilma Santos) immediately decides to end her relationship with her live-in partner when she finds out about his infidelity – even if it means having to raise their baby alone. Luckily, Cory has Roberto (Dindo Fernando), a sweet and loving friend who has been in love with her since the first time they met and who, incidentally, is willing to be a father to her unborn baby. Cory agrees to marry the loving Roberto but just as when Cory learns to put her guard down on love, she discovers a shocking truth about the man she chose to marry.

Restoration Notes:  The ABS-CBN Archives supplied the only existing projection print for the 1980 film Langis at Tubig. The print was hand cleaned prior to scanning the material at 4K resolution. Restoration was done at 2K resolution. The source material was very problematic and posed major challenges with its vast array of damages, molds, warps, ferrotyping, scratches, and torn images were the most prevalent and required the most number of hours. Other damages addressed were black and white specks, unsteadiness, flicker, film grain, film bumps, splice marks and static debris.