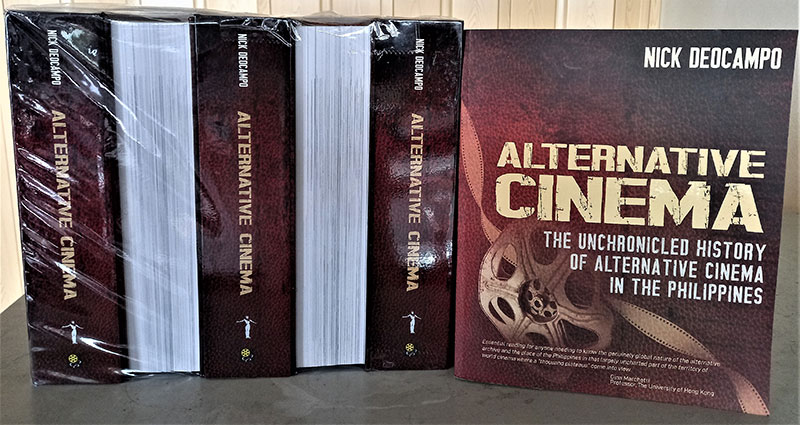 Alternative cinema, author Nick Deocampo propounds, forms part of the broader people’s cinema. The different roles Deocampo takes on as filmmaker, film historian, festival organizer, and professor at the University of the Philippines Film Institute (UPFI) allow him to delve deep into the realm of alternative cinema given the breadth and depth of his cumulative knowledge.

The book uses the lenses of ethnography and history in dissecting alternative cinema in the Philippines and putting them in print as its first historical document. It also presents the rhizome paradigm of Deleuze and Guattari in understanding the “multiplicity of film forms taken by motion pictures as their development becomes interlaced with colonialism, capitalism, technology, culture, and the politics wrapping around the notion of national identity”.

The hefty 912-page comprehensive book aims to surface the “hidden side” of Philippine cinema other than what the commercial movie outfits are producing and big movie houses are showing in major theaters in malls.

The book – which took 40 years in the making using Deocampo’s notes, journals, and diaries –
brings to fore Philippine cinema’s unpopular subculture. In an interview, he further states: “What we know of Philippine cinema, it’s popular cinema, it’s the movie superstars, but outside of it is an entire world of films that are the oldest in the country, are the most political, the most critically-engaged with reality”.

Alternative cinema is thus called because it provides an “alternative to the mainstream commercial, dramatic films”. It includes documentaries, experimental films, short films, animation, student films, and other forms deemed outside the typical and conventional blockbuster movie fares.

Deocampo drew parallelism between the Philippines during the second world war (1944 to 1945) and the country during the Covid-19 pandemic (2020 to the current period).

“[Films] were being made [during World War II] but not the big features because for years the movie industry halted. Just look at the pandemic era that we have right now, Regal, Viva, and Star all fell down, but we are now seeing countless numbers of student films. Look at Cinemalaya and CCP Alternatibo, there are many alternative films being produced. I am pushing the whole consciousness that there are films outside of the movie industry and they are flourishing in the most difficult of times.”