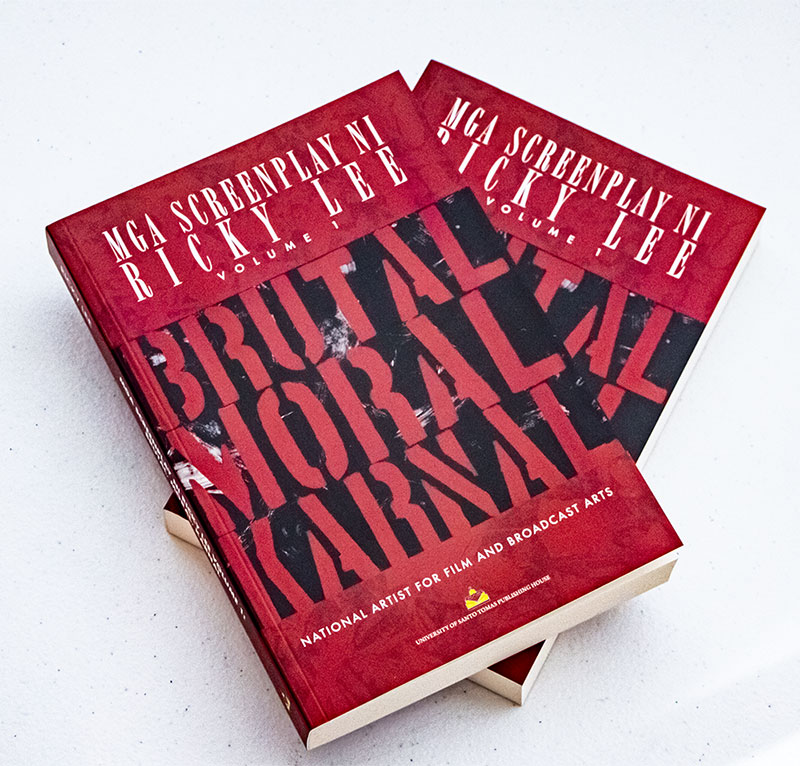 Music in cassette tapes and vinyl drove the scripts to be written. Well, at least for the first two films. For Brutal, it had been the music of Bruce Springsteen, Simon and Garfunkel, The Who, Rolling Stones and Joni Mitchell. For Moral, it had been Madame George, a Van Morrison song. For Karnal, the writer opens his antecedent essay by relating that writing offers had been sparse and that his electric services were cut on a regular basis before embarking on the film.

The first volume in a book series published by the University of Santo Tomas Publishing House contains the complete screenplays of the films Brutal, Moral and Karnal where National Artist for Film and Broadcast Arts Ricardo “Ricky” Lee collaborated with fellow National Artist Marilou Diaz-Abaya.

Done through a manual typewriter, these three films made him contemplate on the challenges women faced during that time and how they seemed to be “second class citizens” in a macho-dominated culture externalized by the reign of action films in movie houses and the reign of a dictator via the Martial Law rule.

Before the actual script, Lee pens the genesis and development of each film, anecdotes on the surrounding circumstances of the films like how they got through the Board of Censors, and, in Karnal, even detailed technical notes from cinematographer Manolo Abaya.

For Brutal, the first time that Lee and Diaz-Abaya worked together, he shares how he was handpicked by Diaz-Abaya to write Brutal after watching Jaguar where Lee was one of its writers. He also relates how the director respected the writer: “Not a single word ang nasa pelikula na hindi nanggaling o kinunsulta sa akin. That was how she respected her writers”.

Lee was more than the story writer and screenwriter to the director when Diaz-Abaya related that “it’s very difficult to delineate where he comes in and where I come in. Because from the beginning, whether Ricky likes it or not, he is thinking like the director already”. The quote comes from the precursory write-up to the full script of Moral.

The book is available at the University of Santo Tomas Publishing House, and through the online shopping app Shopee.