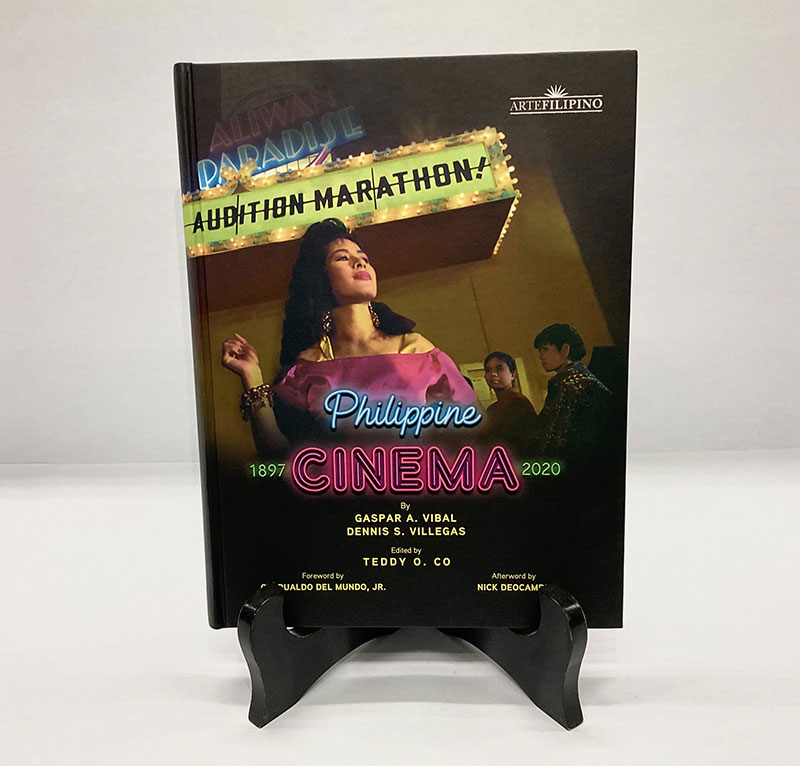 It emerged as the Best Book on Art in the 39th National Book Awards besting five other titles in the competition’s non-literary division. Philippine Cinema, 1897-2020, authored by Gaspar A. Vibal and Dennis S. Villegas and edited by Teddy O. Co, was honored as among “the most prestigious book titles written, designed, and published in the country” for the years 2019 and 2020. The 416-page book, published by the Vibal Foundation, was bookended by Clodualdo del Mundo, Jr.’s foreword and Nick Deocampo’s afterword.

The cover and contents of the book mirror the colorful and vibrant energy of the country’s 123 years of cinematic history from its inception in Spanish colonial Manila to the present pandemic age.

It has five major sections with the first four covering four periods in its history: Flickers of the Early Cinema, 1897-1945; From Wartime Trauma to the Golden Age, 1946-1972; The Dictatorship and the Cinema of Resistance, Escapism, and Transgression, 1972-1986; and Cinema of the Neoliberal Democratic Age, 1986-2020. It also has a section on Indie, Regional, Alternative, and Gender-Fluid Cinema.

Philippine Cinema, 1897-2020 has 100 essays on the many different aspects of the country’s film history: its artistic language, conventions, narratives, textual sources, discourses on women, gender, modernity, and national identity. From the aspect of identity, the topic flows into its inherent hybridity and transnational character.

The book aims to set a middle ground of sorts in viewing cinema’s history by delving into 1,200 notes but also sharing passed on information (gossips) accompanied by more than 1,315 images. The middle ground has the bakya (popular) or the commercial on one extreme and the academic film discourse on the other extreme.

A veritable reference book on Philippine cinematic history, its appendices include Notable Philippine Films, 1898-2020; Notable Actors and Actresses of Philippine Cinema;
Who’s Who in Philippine Film; Philippine Movie Titles in English or Foreign Translation; and
Philippine and World Cinema Chronology, 1885-2020.