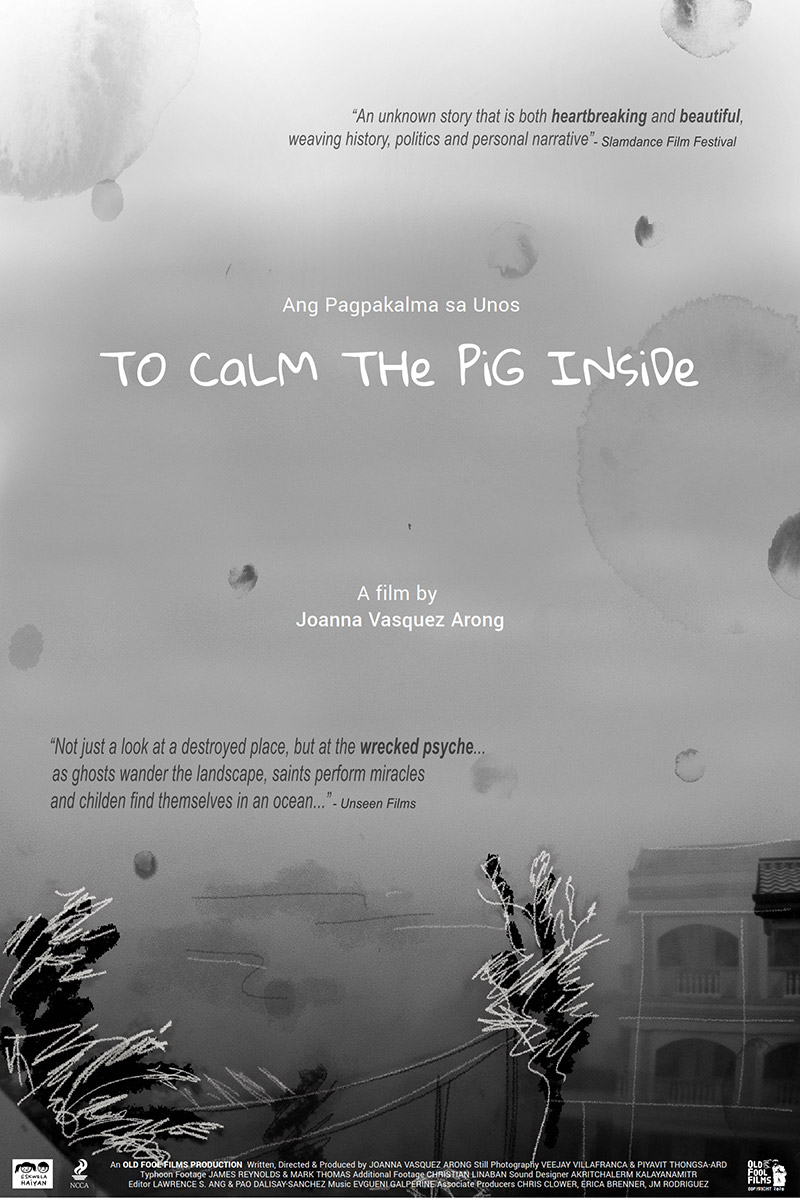 Short Synopsis:
To Calm the Pig Inside contemplates on the effects a typhoon leaves on a seaside city. Myths are woven in to try to understand how people cope with the devastation and trauma. A girl divulges bits and pieces of her own memory of her grandmother and mother to tie in the experiences she felt visiting this ravaged port city.

JOANNA VASQUEZ ARONG started filmmaking in Beijing after deciding to leave the corporate and institutional world in search for new adventures. Her first feature documentary, “NeoLounge,” in 2007, which recounted intimate stories of foreigners who went to Beijing searching to break from their past, won four awards, including two Best Documentary awards. Her second film, “The Old Fool Who Moved the Mountains,” which explores an ancient Chinese fable and how it relates to three generations, premiered at the Pusan International Film Festival in 2008 and won two awards, including the Best Documentary award. Her third film, “Sunday School,” filmed in Zambia, was commissioned by the International Film Festival Rotterdam for their Forget Africa series, and premiered in 2010. Joanna also creates film installations for galleries and museums screened in Cebu, Manila, San Luis Potosí, Chicago and New York in 2019 and 2020. Her documentary short “To Calm the Pig Inside,” which premiered at the Slamdance Film Festival in January 2020, won the Grand Jury Prize. Her new project 116B University Avenue, Rangoon, which explores the notion of identity and the idea of home and homeland, was one of 19 projects chosen to pitch at the IF/Then Southeast Asia 2020 lab. She also wrote her first feature narrative script, “The Sigbin,” which explores the relationship of an assassin and his daughter, he only recently discovered.

To Calm the Pig Inside won the Special Jury Prize in Cinemalaya 2020. It also received the Grand Jury Prize at the Slamdance Film Festival.

The Philippines is vulnerable to natural disasters including volcanic eruptions, earthquakes and typhoons. At least 20 typhoons pass through the country per year. Just at the end of 2019, a few islands known as tourist destinations were devastated from a typhoon and now a long dormant volcano close to Manila is ready to erupt again the second week of 2020. Yet, similar stories of continued suffering from mismanagement of these disasters seem to persist. After spending weeks, line producing on a film production on the devastation super typhoon Haiyan wreaked around the Philippines in 2013-2014, I felt there was another layer to the stories which had not been shared. Locals recounted to me their reflections, disappointments, dreams and even the jokes they shared with each other in order to cope with the trauma. And through time, they continued to express their growing frustration towards the government response to their plight. At first, since I am not from this town, I thought it was not really my story to tell. I then decided to approach this story more as a personal film essay, interweaving my own experience with the stories I heard from the community at large. “To Calm the Pig” Inside became a contemplation on how people cope with both personal and collective pain.